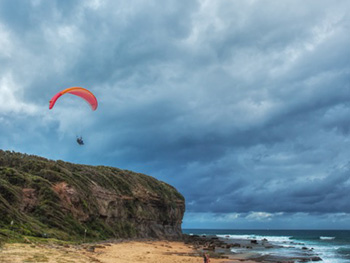 The Sydney Paragliding and Hang Gliding Club (SPHGC) are spreading their wings further afield from their Northern Beaches skyline, catering and even mentoring a variety of pilots across various Sydney locations.

For more than 20 years, the club has been fostering Paragliding, Powered Paragliding, Hang Gliding and Weight-shift Microlighting on Sydney’s northern beaches.

With close to 100 financial members and an equal number of associate members- who are kept in touch with the SPHGC activities via their chat group, Club President John Brassil says to create an even more inclusive and growing club, the Club Committee of Management (CoM) has decided to break out of its Northern Beaches centric outlook.

“The committee plans on running some of it regular monthly club meetings in western Sydney as well as some popular events, such as Reserve re-pack workshops,” said John.

“While our flying sites are on the coast, many of our members are located throughout the greater Sydney area. We want to make it easier for all members to reap the benefits of being a member.”

The club is active. The CoM recently embarked on an aggressive set of priority projects including;

“The club has a good relationship with the local council who manages the coastal reserves used by local pilots, but the major responsibility of the club, to its members and the broader flying community, is the retention and development of flying sites in the area,” said John.

“To do this effectively in shared use areas, in an increasingly risk adverse community, and where council funds are stretched, the club is focussed on working closer with council in a formal framework”.

“Like many Paraglider and Hang Glider pilots, our members enjoy both coastal and inland flying. Living on the Northern Beaches allows me to have coastal flying in my backyard, but flying inland both recreationally and competitively, is also a passion. I was fortunate when I started flying to have a close group of senior pilots in the club who were my mentors. They took me inland on all their trips and this made it easy for me to progress in the sport. “

The Club is keen to copy this approach and will be launching, next flying season, its PG2 mentoring programme. The club will be reaching out to all NSW Flying schools and asking them to refer their Sydney graduates to them. They will then put them in touch with the volunteer mentors to help them get to know other members and introduce them to our flying sites.

Julian Lyon, the current Vice President said, “flying at the local sites and contacting members was something he was initially hesitant about”.

“While I received immediate acceptance as a PG2 pilot, the immense amount of assistance blew me away. I think it's worth trying to share that. We are keen to see if the new PG2 Mentoring program helps retain more pilots in the sport and grows our membership base.”

The club’s flying sites cater for PG2 through to PG5 Paraglider pilots and Supervised through to Advanced Hang Glider pilots. There is two Flight Training Schools located on the Northern Beaches; Sydney Paragliding and Sky Out. Information on these schools is available on the club’s website www.flysydney.com.au . Visiting pilots are encouraged to join the club and have access to the flying site guides and experienced local pilots.

It’s an enormous thrill to see our members soar high, spreading their wings and setting their sights
on new horizons- all in the name of promoting our sport and demonstrating the incredible
capabilities of our aircraft. In an Australian-first feat, a group of our passionate, paramotor pilots
have conquered the skies in the longest paramotor climb- travelling 1600km from Lake Eyre to the
snow-capped crest of Mount Kosciusko.
To achieve the mammoth milestone, the pilots, aged between 23-62, recently braved the wild
weather of the Antarctic blast and turbulent thermal gusts to reach ground speeds of up to
100km/hr, over the two-week expedition.
Ballina-based pilot and instructor, Andrew Polidano tells us how spending a total of 18 hours in the
air, the six pilots had to use their skill and years of flying experience to navigate through the harsh
weather elements, both in the skies over the South Australian outback and Australia’s highest peak-
7310ft above sea level.
“We flew over some indescribably beautiful and remote country, slept under the outback stars and
accomplished something that hasn't been done before,” he said.
“It took us eight months to prepare, as we had to do everything in our power to minimise risks and
potential dangers of wild weather- including the dusty thermals over the remote areas of South
Australia and snow and icy blasts on the top of Mt Kosciusko.
“Starting our trip in Lake Eyre (49ft below sea level) last month, we hit some challenges along the
way, like unexpected strong winds and turbulence in the Flinders Ranges, that forced us out of the
sky.
“To achieve the flight up to Mt Kosciuszko, we required a strategic take-off and several attempts-
due to the turbulence associated with the upper winds, which were exceeding 100km/hr. Only three
of our pilots made it up there, but the view was awe-inspiring- a spectacular sight overlooking the
snow-capped mountains.”
Andrew was joined with fellow instructor Justin Shaw, 47 of Bendigo and pilots, Dr Peter Evans, 62 of
Canberra, Peter Forbes, 39 of Bendigo, Brendan Tacey, 41 of Whittlesea, Christopher Farney, 23 of
Kilmore and driver Carl Norton, 37 from Longwood Victoria.
Taking a bird’s-eye view of our amazing countryside, Andrew said by far, the most spectacular
scenery was witnessed during the flight from Khancoban, on the western side of the Snowy
Mountains. It’s snow-capped mountains and picturesque landscape was a vast contrast from the
desert plains they had flown over just a few days prior.

To achieve the Australian-first feat, Andrew said a big thanks had to go to Poliglide, Knowsley
Airpark and Paramania Australia for their support and sponsorship.
So where to now for our paramotoring heroes? Well the skies the limit and their next adventure may
see them soaring to even greater heights- stay tuned.
To follow the boys’ adventure from Lake Eyre to the crest of Mt Kosciusko, check out the photo
gallery at: Link to be provided