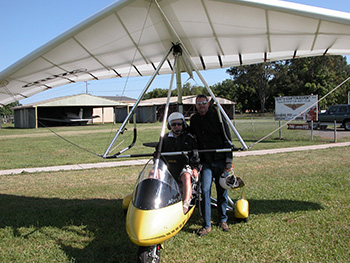 We look into the life, determination and passion behind one of the founding fathers of the hang gliding world, Pat Crowe and how his skill and love of aircraft has helped shape the sport that it is today.

Recently being awarded to FAI Hang Gliding Diploma award at Grafton Airfield, Pat Crowe’s love of aviation began as a young 12-year-old boy, when he started in the local air cadets before later joining the Air Force- where he built on his already strong knowledge of aerodynamics.

Even from those first humble beginnings as a young boy, Pat loved nothing more than building and flying model planes and had a passion for various types of aircraft.

Friend and fellow pilot, Graeme Henderson recalls the pivotal role Pat played in the history of the sport of hang gliding- by utilising his extensive experience in the air cadets and flying model planes to boat tow flat kites and deltas.

“Known as Grafton Water Ski Club’s best boat driver, the fact that Pat understood how wings fly from his time at Air Force and that he had taught himself to build and fly model aircraft from reading magazines, meant that he was able to evaluate the situation calmly, figure out the remedy, and resolve the situation safely for pilots who were taking to the skies,” said Graeme.

“First, we need to look at Bob Clements flight on that day, 8th Sept 1963. Bob got to about 60 feet in the air and suddenly the glider pitched hard nose down and Bob touched the bottom of the river in his crash."

“On Rod Fuller’s attempt, he insisted on Pat Crowe being his driver- this was perhaps the most important single decision in the history of hang gliding. Neither Rod nor Pat were aware of the previous unsuccessful attempts earlier that morning. They only learned of that in 2006. This means, they had been unable to benefit from the previous failures and had to figure the whole thing out for themselves as they went along.”

Graeme said that due to the location of the flight site, there was a strong wind gradient on the day. Not long into the flight, Pat quickly realised that Rod was right above him, rather than a few feet off the water behind him. Pat opened the throttle, 5 - 6 seconds at the most and suddenly realised he had to make some quick-thinking decisions. The dilemma was, if he slowed the boat too much, it would 'drop off the plane' and effectively 'stop in the water'. This would mean the glider would end up in front of the boat until, one way or another, it reached the water.

“The situation stabilised then, Rod Fuller stopped shaking his head after a few more seconds when he realised it was flying and controllable. The higher wind that sped the glider meant Pat was going as slow as he dared go and Rod wasn't coming down,” said Graeme.

“Less than 20 seconds into the flight, everything was under control. Now this is the point where Pat was faced with the Grafton Bridge.”

During this time, Rod Fuller was merely the passenger who, after his initial shock, was now enjoying the flight and following Pat.

To navigate the upcoming obstacle, Pat made the widest possible turn as smoothly as possible, and with the change in direction, Rod was able to get down safely.

Behind the wheel of the boat, Pat had total control at all times. What control Rod Fuller had, could always be overpowered by Pat Crowe.

“These are special men, they are not just a couple of blokes who stumbled in and got lucky. Together they were the perfect team for the job, but there was good reason for Rod Fuller to ask for Pat Crowe to drive that day,” said Graeme.

“In the history of modern hang gliding, there are only three men who held the total fate of this hang gliding future in their hands. John Dickenson, Rod Fuller, and Pat Crowe. As a team they succeeded, but had any of them failed they all would have failed.

“It is important here to remember, that this event happened before John Dickenson's first flight. And to remember, that it was only during that flight that he realised what he had actually built. Everything that came after was built on this successful flight. Pat Crowe and Rod Fuller proved that this thing would fly, that is second only to Lilienthal proving that something could fly.”

It’s an enormous thrill to see our members soar high, spreading their wings and setting their sights
on new horizons- all in the name of promoting our sport and demonstrating the incredible
capabilities of our aircraft. In an Australian-first feat, a group of our passionate, paramotor pilots
have conquered the skies in the longest paramotor climb- travelling 1600km from Lake Eyre to the
snow-capped crest of Mount Kosciusko.
To achieve the mammoth milestone, the pilots, aged between 23-62, recently braved the wild
weather of the Antarctic blast and turbulent thermal gusts to reach ground speeds of up to
100km/hr, over the two-week expedition.
Ballina-based pilot and instructor, Andrew Polidano tells us how spending a total of 18 hours in the
air, the six pilots had to use their skill and years of flying experience to navigate through the harsh
weather elements, both in the skies over the South Australian outback and Australia’s highest peak-
7310ft above sea level.
“We flew over some indescribably beautiful and remote country, slept under the outback stars and
accomplished something that hasn't been done before,” he said.
“It took us eight months to prepare, as we had to do everything in our power to minimise risks and
potential dangers of wild weather- including the dusty thermals over the remote areas of South
Australia and snow and icy blasts on the top of Mt Kosciusko.
“Starting our trip in Lake Eyre (49ft below sea level) last month, we hit some challenges along the
way, like unexpected strong winds and turbulence in the Flinders Ranges, that forced us out of the
sky.
“To achieve the flight up to Mt Kosciuszko, we required a strategic take-off and several attempts-
due to the turbulence associated with the upper winds, which were exceeding 100km/hr. Only three
of our pilots made it up there, but the view was awe-inspiring- a spectacular sight overlooking the
snow-capped mountains.”
Andrew was joined with fellow instructor Justin Shaw, 47 of Bendigo and pilots, Dr Peter Evans, 62 of
Canberra, Peter Forbes, 39 of Bendigo, Brendan Tacey, 41 of Whittlesea, Christopher Farney, 23 of
Kilmore and driver Carl Norton, 37 from Longwood Victoria.
Taking a bird’s-eye view of our amazing countryside, Andrew said by far, the most spectacular
scenery was witnessed during the flight from Khancoban, on the western side of the Snowy
Mountains. It’s snow-capped mountains and picturesque landscape was a vast contrast from the
desert plains they had flown over just a few days prior.

To achieve the Australian-first feat, Andrew said a big thanks had to go to Poliglide, Knowsley
Airpark and Paramania Australia for their support and sponsorship.
So where to now for our paramotoring heroes? Well the skies the limit and their next adventure may
see them soaring to even greater heights- stay tuned.
To follow the boys’ adventure from Lake Eyre to the crest of Mt Kosciusko, check out the photo
gallery at: Link to be provided