As a renowned pilot in Port Douglas, Kevin Gilligan was passionate about the freedom of flight, giving people a unique aerial view of Northern QLD.

Working as the chief flight instructor and proprietor of Updraft Microlights and Hang Gliders- a SAFA approved flight training facility in North QLD, Kevin was known by his friends as a local legend.

His extensive experience with weight shift aviation stems back to 1976 where he built his first glider from plan set, “The Wind Soarer MkII.” His various career achievements include competing in over 25 national ladder competitions. He was one of only three pilots in the country that had CFI credentials in both microlighting and hang gliding.

“Kevin was an incredible pilot and one of the first SAFA members. He was an underrated operator, who has taken 1000s of people microlighting and hang gliding,” he said.

Kevin grew up in Melbourne but moved to Port Douglas in the 80s. A former electrician by trade, he turned his career sights to introductory flights in micro lighting and hang gliding.

“Kevin taught me how to fly in 2007 and we have been great friends ever since. If you didn’t know him personally, you would have seen him every time you heard a buzzing in the sky over Port Douglas. You would have looked up and seen a yellow microlight with a green wing or when you drove past Rex Lookout and seen him taking people hang gliding, you would have also seen his beloved brown 80 series landcrusier covered in updraft stickers,” Steve said.

“Kevin loved his business and was living the dream, getting paid to fly over one of the most beautiful places on the planet.”

Kevin will be dearly missed by friends and family and remembered as a local legend by the SAFA community. 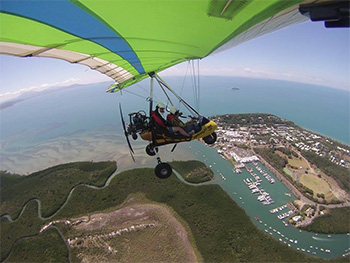