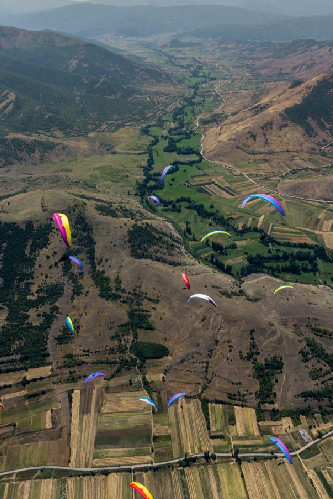 Congratulations to Kari Ellis for winning  Bronze in the Women’s category at the 2019 FAI Paragliding World Championship, held in Macedonia this August.

The air sports extravaganza saw most  of the Worlds' best race paragliding Pilots competing for the much-coveted World Champion title, as well as National Team Championship accolades. After two weeks of gruelling, non-stop action, with over 1000km flown and with over 30 hours in 10 individual tasks, Kari managed to nab third place overall in the Women's ranking.

“My goal for the Worlds was top 50 and podium in the Women’s Championship. With the quality of the field here, both goals were going to be a huge challenge,” said Kari. “By Task 7, I had climbed the leaderboard into the mid 60s overall and 3rd in the Women’s. At that point, we took stock of team and individual results and decided I would focus on the Women’s Podium."

“After 10 epic tasks, France and Italy were tied for 1st place in the team Championship. Italian pilot, Joachim Oberhauser is the new World Champion and French pilot, Meryl Delferriere is the Women’s World Champion.”

Gareth was our top Aussie, coming in 41st, Fez in 97th and Pete in 102nd place. A maximum of 10 tasks were flown, with one mandatory rest day. The daily course was set according to the day's weather and was subject to change.

As always, performance in the air is a direct result of quality support on the ground. In this regard we owe a big vote of thanks to Australian team managers, Dave Gibbs and Phil Mansell for their diligence and attention to detail.